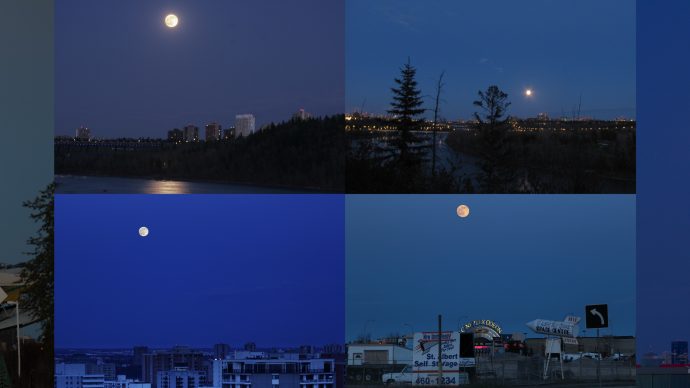 Photographing the rise of a Full Moon is a popular thing to do since the Moon can be quite photogenic while it is rising. While it is still low in the sky, the Moon can appear very striking hovering above an interesting foreground such a landscape or a city skyline. Around the date of Full Moon, the Moon rises near the time the Sun sets, so the lighting can be especially interesting. Most of the time, when I’m photographing a full looking Moon rising, it is either just before full or just past full, from a few hours to as many as 30 hours. For me, as long as the Moon is at least 98% illuminated, I consider it full for the purpose of photographing a Full Moon. But occasionally, the Moon reaches 100% full after it rises and it is still low enough in the sky for a nice image that includes the foreground. I call this the Moment of Full Moon.

As I scanned the list of Full Moon photo opportunities for 2015, kindly provided by my good friend Alister Ling, I noticed that on Sunday, 2015 May 3, at 21:41:45 the Moon would be exactly full, neither waxing nor waning, and sitting an altitude of 6.3° above the horizon. The time of Full Moon would be 7 minutes before end of civil twilight, so there would still be enough light for an image including the foreground. The Moon’s azimuth at The Moment would be 123.6° (ESE) so I knew, from having shot moonrises for several years, that The Moment could be photographed from several vantage points around Edmonton. I had shot the moonrise from all these locations before and so I had a bit of a “been there, done that” feeling for the May 3 opportunity.

But then an idea occurred to me. Why not shoot The Moment of Full Moon from all of these locations at the same time? There are a number of “nightscape” shooters in the RASC Edmonton Centre, so doing this should not be too difficult. All I would need to do is determine the locations, prepare reference images, define a way to coordinate the shots and enlist some photographers. The resulting images could then be assembled into a montage that shows how The Moment looked from different vantage points.

From my collection of reference images, I chose six locations in Edmonton. I then enlisted five other photographers for the project. As a bonus for me, one of the locations was one that I had long thought about but never shot from. Here are the locations and the shooters that agreed to do it.

Bruce has started shooting moonrises of late and has joined Alister and I on several previous opps. He was keen to participate to hone his skills. He and Alister had shot from Groat Bridge before, so this was a good fit for him. Linda has shot nightscapes and timelapses before but not at St. Georges Crescent, a spot that Alister and I have used for years. St. Georges would give Linda a chance to shoot The Moment, like Bruce nearby on the bridge, with the river valley in the foreground.

I have shot moonrises from Ross’ downtown high rise apartment balcony a few times, so it was an easy decision to assign Ross to his own balcony. Warren typically shoots nightscapes with the Milky Way and aurora in non-urban settings, so I thought he might enjoy a change of scenery at the Kingsway Avenue location with the cool aircraft on display at just the right azimuth. Alister is a old pro (grizzled veteran?) at this game and he and I have shot from the 156 St. Overpass at Yellowhead many times. I figured he could bag this one easy peasy. I selected the Mark Messier Trail location for myself because I had long thought that the kitschy rocket, advertising the St. Albert Self Storage “Space Centre”, was apropos for a “Moon Shot”, NASA style.

I prepared reference images for each shooter and put together a basic shooting plan:

I should note here that I asked for landscape orientation since I thought it would make it easier to assemble the montage. But with the Moon at a relatively high altitude of 6.3°, a landscape frame might leave out interesting foreground.

The afternoon of May 3 was a fair mix of sun and cloud but it looked promising for that evening’s moonrise. Environment Canada said “Clearing this evening” and the 19:00 MDT satellite animation looked encouraging on the AB/SK border in the general azimuth of the moonrise. Earlier that day, Alister gave his professional meteorologist’s opinion by saying said it would be “nip and tuck”. To me, that meant we had to try for it. So we did and it paid off.

The skies cooperated (although it was quite breezy and crisply cool) and Moon made its appointment with fullness. I was successful, as were Ross, Warren and Alister. Bruce reported he got the money shot, but with issues. Linda reported she had a camera issue around the critical time, but might have something.

Warren and Alister sent me composite images while Bruce and Ross sent me single captures from which I created composite images. Bruce had some focus and exposure issues but even so, I was able to create a decent composite. Linda sent me a single capture while she worked through the issues with her other images. After I assembled the montage, seeing all of the final images together, it struck me how different the same Moment of Full Moon can look.

This event started as a “light rise” (Moon rising in a relatively bright sky) but at The Moment, the Moon was in a rather darker sky, typical of a “dark rise”. I did not prescribe when to take the foreground images, so the sky looks quite different amongst the final images. Since we did not all use the same white balance, the sky colour (and Moon colour to some extent) differs among the images. Bruce and Alister used cameras modified for astrophotography (Canon “a” series, which means a filter normally present in the camera has been removed), so this caused other differences in colour. Differences are also due to which foreground image is used for making a composite.

These differences serve as an instructive opportunity to show how the same moment can be captured differently. Coupled with the stories below of how things went smoothly for some and not so smoothly for others, it is an interesting tale.

My thanks to all the shooters that participated. Let’s do it again some time.

Bruce commented: “I got a bunch of pix, but mine of ‘the moment’ is less than satisfying. Slightly overexposed, slightly less than perfect focus. Maybe more than slightly.”

Linda reported that a few things did not go as planned. She got back into town with just enough time to get her camera and tripod, but she couldn’t find her tripod. She opted for a monopod braced against a park bench. Things probably would’ve worked out better if the camera had not frozen at The Moment. After The Moment had passed and her camera seemed to be working again, Linda sent an email reporting the iffy state of her attempt, and that the camera was currently taking time lapse images every 10 seconds. This did not last for long. She only got about 60 frames in when the camera stopped taking pictures and displayed an error she had never seen before.

Ross commented: “Got it. For reference, Ross – image 2676. Since I was shooting from a much higher perspective, I didn’t have nearly the foreground oppys so the moon is much smaller in mine.”

Warren commented: “Yup, nice to have the weather cooperate! Everything went smoothly for me and I’ve sent Luca my shots. It was fun. I had several friendly characters quite curious as to what I was doing. One guy wanted me to take his picture with the moon! I said the moon was too high (it was by then), but he said he had no problems getting high and he laughed at his joke. Another fellow was quite helpful, since when I was waiting for the moon to appear (it hadn’t yet cleared some buildings) he said that he could see the moon from across the street. So I crossed the street, and nabbed some quick (extracurricular :-)) shots of a very low moon just rising.”

Alister commented: “I set up before moonrise at the 156 St overpass to the Yellowhead, about 7km to the northwest of downtown Edmonton. When I arrived, there was a line-up of some 20 trucks and street cleaners removing the accumulated sand from winter. I was worried the dust would ruin things, To boot, the traffic noise is unpleasant at best, but the brigade of cleaners was going to be downright awful. Luckily, they were efficient and moved past me fairly quickly. A couple of passers-by asked what I was photographing when the Moon was low: “cool!” they said. The moment came uneventfully.”

I set up on the west side of Mark Messier Trail just north of 137 Ave just before moonrise. I had selected this location because I thought the kitschy rocket, advertising the St. Albert Self Storage “Space Centre”, was apropos for a “Moon Shot”, NASA style. It was quite breezy and a crisply cool 7° C. Cars and trucks whizzed by me at regular intervals as I awaited the appearance of the Moon. I’m sure many drivers wondered what I was doing there, at least until the Moon was quite obvious in the sky.

For the Moment Shot, I used a wider frame and slightly different position. I did a timelapse with a 5 second interval that lined up with 21:41:45. A few minutes before the moment, some small clouds appeared and I worried a bit that they might screw up the moment frame, but they didn’t. A bit later, a semi-trailer truck passed me, completely blocking entire frame! I hadn’t occurred to me that a passing vehicle might wreck the moment shot – luckily this did not happen.