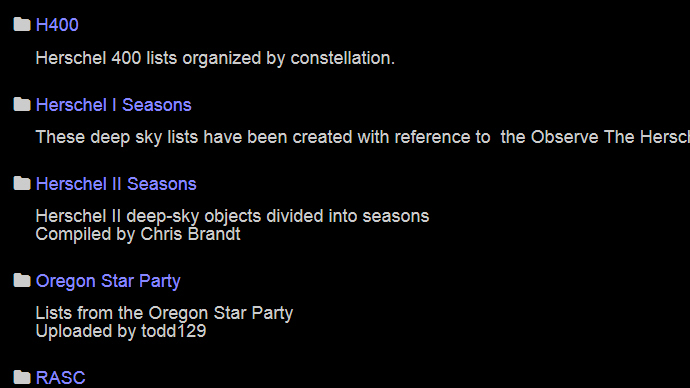 I use SkySafari to plan and log my astronomical observing. The SkySafari website contains a online repository of observing lists crowd-contributed by users (but not necessarily vetted by anyone). I have discovered errors in some of the online observing lists and since reporting the errors in the Simulation Curriculum Community Support Forum doesn’t appear to get them corrected, I have created this post as a community service.

I discovered an error in the following Herschel 400 Lists by Season skylists at the very end of my project to observe the Herschel 400 in March 2020:

The skylist files contain NGC 4752 (a 15th mag galaxy) whereas the Astronomical League lists NGC 4725 (a 9th mag galaxy). This error is hard to notice: Both 4752 and 4725 are in galaxies Coma Berenices, fairly near each other in the constellation and to boot, both objects appear in the same position in the Herschel 400 if included. By the way, the skylist file for the Herschel 400 by Constellation – Coma Berenices contains the correct object NGC 4725.

In August 2020, I discovered an error in the Colored Doubles list. This list includes the star Gamma UMi (Pherkad), which is not a double star. Since I could not find the source of this list, I decided to substitute Polaris, a famous double star in the same constellation, with a name that also begins with “P” and that was first noticed by William Herschel in 1780.